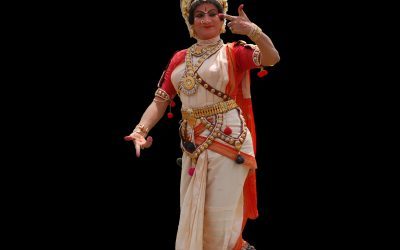 Mantap Prabhakara Upadhya He is popularly known by his family name alone as ‘Mantap’ was born and brought up at a village Parampalli, Saligrama where Yakshagana was the traditional art and only entertainment for people. Right from his school days he had great interest...

Yakshagana, one of the most illustrious traditional theatrical forms of South India, obviously finds its firm roots in the Natyasastra of Bharata. It is a profound and popular performing art of Karnataka. Especially it’s Northern School (Badagu Tittu) is known for its visual treat both in respect of dance and costume. It emerges out as a complete theatrical form and makes a grand synthesis of form and content in an aesthetically marvelous manner.

Soloperformance in Yakshagana style is an entirely new and refreshingly original innovation in the classical dance-drama systems of India.Here the Natya (theatrical)form of the original art is kept intact and the Bhana / Bhanika (solo) dimensionis aesthetically developed.

Dr. R. Ganesh is a renowned Sanskrit scholar, poet credited with reviving the ancient art of Avadhaana and an Indologist well versed in the nuances of all classical Indian arts. Dr. R. Ganesh is a graduate of Mechanical Engineering, A holder of M. Sc from IIsc, Bangalore and a master’s degree in Sanskrit. He is a literary wizard and has contributed a number of valuable works to the world of literature. He has been successfully pioneering the spread of knowledge and culture through his lectures, writings and compositions.

Mantap Prabhakara Upadhya He is popularly known by his family name alone as ‘Mantap’ was born and brought up at a village Parampalli, Saligrama where Yakshagana was the traditional art and only entertainment for people. Right from his school days he had great interest in Yakshagana which turned him into a refined, radiating and ingenious artist by vocation and led him to open up a new world of diligence and delight.

After few years of professional acting, Mantap migrated to Bangalore and has established his own ice cream industry and Yakshagana became his hobby. He is very innovative and hardworking for customer satisfaction and even today spends his quality time in his manufacturing unit for quality production. He has encouraged, helped, guided many youngsters and enthusiasts to own their own ice cream parlors in Bangalore. Mantap is married to Smt. Mangala who has been of great and immense support to all his achievements both as a businessman and an artist. He is blessed with two daughters Dr. Madhuri and Pramada who are a dentist and an engineer by profession respectively.

Mantap’s second innings started with the concept of ‘Ekavyakthi Yakshagana’ which is a unique and wonderful concept conceived and designed by Dr. Ganesh. This was the path breaking concept of solo performance of Streevesha in Yakshagana.Introduction of features such as ‘Natyabhinaya’ instead of ‘Nrithyabhinaya’, seldom thought even in other classical dance forms and a very high quality of ‘Shuddha Satvaabhinaya’ are note worthy. Mantap has introduced many ‘Chaaris’. ‘Nrithyahasthas’ and several ‘Karanaamshaas’ of Naatyashasthra too into the existing nritta repertoire of Yakshagana under the able guidance of Guru Smt Sundari santhanam. He has also introduced significant changes in the use of ornaments and attire of yakshagana sthreevesha. He has now successfully staged over 1000 shows of ‘Ekavyakthi Yakshagana’ all over India and abroad. Rasikas, scholars and cultural organizations have enjoyed, patronized and rewarded the team duely. Following are a few awards to name to his credit: ‘Rasabhaava kalayogi’ 2003 awarded at Udupi. ‘Yaksharasarushi’ 2004 awarded by Palimaaru Mata, Udupi. ‘Sri Krishnaanugraha Prashathi’ 2005 awarded by Adamaaro Mata, Udupi. ‘Kalaputra Ratna’ 2005 awarded at Saligrama. ‘Yakshatapasvi’ 2005 by Yaksharanga Davangere. ‘Sri Rama vittala prashathi’ 2008 by Pejavara Mata,udupi. ‘Yakshakalaratna’ 2008 at shimoga. ‘Natya Bhaskara’ 2008 by Alvas,Moodbidre. ‘Natyaratnakara’ 2009 at Svarnavalli. ‘Samskriti Sinchana sinchana prashasthi’ 2009 by K.S.Hegde foundation, Mangalore. ‘KaravaliRatna’ 2010 at Bangalore. ‘Kanakapushpabhisheka’ at Kuchipudi Utsav 2011.